While precise dispositions of Hesse-Engleburg troops are in some places difficult to pin down, especially with new units forming, the following concentrations are known or believed to be in specific (or un-specific) locations.

1) Vergoldeten - 6 battalions of infantry under Generalmajor Count Manfred von Waffenschmidt are still believed to be wintering here, along with a few detachments of Hussars.
2) On the road from Tipplebruder - A mixed formation of musketeers, jager, and hussars are believed to be on the road back home from Tipplebruder now that the situation seems stable there.
3) Somewhere at sea - The Hesse-Engelburg squadron and troops under Ambassador Colonel Freidrick von Heiner are believed to be somewhere at sea still, on their way to....somewhere. Troops include over 500 men in uniforms resembling the Gallian marines, and a detachment of Garde du Corps Prinzessin Gertrude hussars.
4) Stollen - A small part of Garde du Corps Prinzessin Gertrude hussars under one Major Rudel have been camping on the lawn of the Grand Duke's palace through the winter, waiting for an audience.
5) Hesse-Engelburg - elements of at least 8 infantry regiments and at least 3 cavalry regiments are either active or forming, plus jagers and artillery.
Posted by Snickering Corpses at 9:41 PM 3 comments:

Have a few items I want to sell, to finance other things :> I also have, if you have alternate interests, a few 1976 coin sets, some Hot Wheels and similar cars (mostly 70s-forward), and a baseball card collection of mostly 80s/90s cards. If interested, contact me via this principality's name at snickeringcorpses dot com, and leave a comment that you've emailed me so I can look for it.

1) 35 unpainted Old Glory SYW Austrian Grenadiers - a mix of command
and other ranks, and a mix of the "Hungarian" and "German".

For those who'd like to see more of the Sash & Saber figures, check out the early April 2008 posts from http://11kilo.blogspot.com/
Posted by Snickering Corpses at 5:17 AM No comments:

Here's photos of some of my recent acquisitions as promised, including a few mystery poses of RSM off of Ebay. As always, click the photo for a larger view.

RSM95 Prussian Cuirassiers. Swords and flagpoles are separate. The two right front figures are intended to do dual duty as an officer and a standard bearer, depending which item you equip them with. 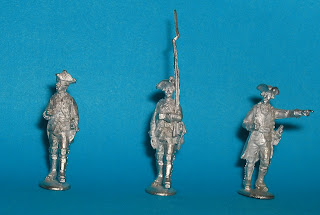 And finally, I have a set of figures that I'm fairly sure are RSM95s, but I need help identifying which group and pose they are:

Photo to follow once I get a chance to take one, but Saturday's mail brought with it the arrival of a dozen Prussian Cuirassiers from RSM95. I really like them, although the twist on the officer/standard bearer figure looks a little uncomfortable. Eventually, I'll buy enough bags of these for a full regiment, as each bag gives me one squadron with officer, standard bearer, bugler, and 9 troopers. So it'll take 4 bags rather than 3.

Also, Friday's mail (I think) brough in the JR Miniatures buildings I mentioned in my earlier post. I'll try to get pictures of all of the above soon.
Posted by Snickering Corpses at 5:17 AM 1 comment: