I should soon be posting a fresh set of size comparison shots.
Posted by Snickering Corpses at 10:33 PM 3 comments:

Jeff requested some more photos of the Imperialist miniatures. You're right that they're not visible much online, as the maker has no online presence. I received my samples through the generosity of a fellow OSW list member. Pictures from side and rear follow. Pricing on the list I have is $1 for foot, $2.50 for mounted (includes horse), $6 for cannon. As always, click on the photo for a larger view.

Posted by Snickering Corpses at 6:17 AM 2 comments:

Stokes asked me for a comparison shot with Spencer Smith, RSM, and Revell SYW figures. While I had the camera out, I did a little more than that. As always, click on the photos for a larger view.

First up is the grand comparison photo of 18th century miniatures. From left to right, they are:

Next, we have a group photo of the Imperialist Miniatures samples I received some months ago. They are, I believe, 25mm figures rather than 28/30, and are for the War of Spanish Succession rather than the Seven Years War. But they're gorgeous little figures, and only a little more expensive than RSMs. I've especially fallen in love with the French officer. From left to right, they are: 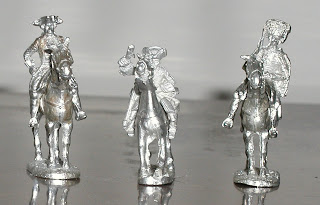 Here we have a cavalry comparison, with the Imperialist French trooper between a RSM95 Prussian Mounted Officer on the left and RSM95 Prussian Hussar on the right. The size difference is rather glaringly obvious here. It's also a little odd looking for the Imperialist trooper to be unable to see over his horse's head. However, on a lark I switched figures and horses, and discovered that putting the RSM officer on the Imperialist horse, and vice versa, erased much of the immediate height difference between them. And both of them can see over their horse's heads. 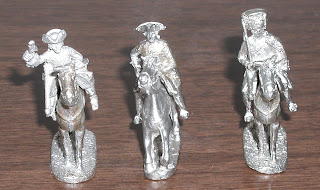 Today's mail brought a bounty of items of interest for wargaming.

First off on our list is Battlegames magazine issue 10, which has taken a little while to make its way to my US seller, and thence to me. But as ever, it's well worth the wait. I'm already particularly intrigued by Henry Hyde's siege rules, and also by the Boxed Sets ideas put forth by Stuart Asquith. I'm pondering the possibility of taking some of Charles S. Grant's Tabletop Teasers and working them into WW2 scenarios and possibly other periods as well.

Next on the list is a new book, Panzer Commander, the memoirs of Colonel Hans von Luck. A German officer, von Luck served through a wide variety of World War 2's battefields, including a considerable amount of time under Rommel. I've already been captivated by some of the writing this evening, enough so that I'm rather later in posting this than I'd intended. :> And best of all, I received the book free. In theory at least. In practice, the cost of the book to me is the cost of shipping for a book I'm sending out for free to a different party. And all of this is occuring through a service called Bookmooch. The basic premise is that you list books you're willing to give away, getting one tenth of a point for each listing. For every book someone mooches from you, you get a full point. It costs one point to mooch a book from someone else.

The best, however, I have saved for last. I've been sitting upon a secret, waiting for the mail to finally deliver it, and it has at last arrived. In one of those random 'coincidences' that make you think perhaps God is just doing something nice for you and remember to say thank you, I found myself staring at a photo off of one of my online searches of a set of painted Spencer Smith plastics for sale. I sat with dread waiting for someone with deeper pockets to come in and snap them up before the deal closed, but that terrible fate was not to be. The deal was closed, the figures shipped, and I present to you the full array of over 60 figures. Two of the muskets are broken off at the shoulder, but that hardly matters to me. One can accept a little battle damage in such august old campaigners.

(click on a picture for a larger view - warning, huge files! I'll try to shrink them a bit later.) 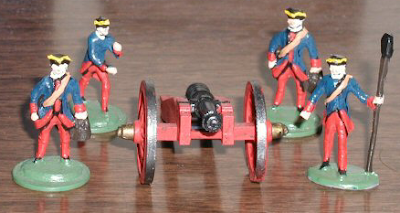 My present thought is that these will likely form a Freikorps in Hesse-Engelburg service, but we shall see if I stick with that. They will certainly have their rightful place amongst the troops, at any rate.

There is a certain reverence which only the collector personality understands when one first unwraps an item of significance, recently acquired. These particular figures may never have been touched by the hand of a wargaming great, but one can see their brethren marching proudly at Mollwitz in Charles Grant's The Wargame, and feel a certain measure of awe to possess a set of figures perhaps even older than yourself.

There are some figures loose from their bases, and one or two missing bases. I took advantage of the latter to set one beside my RSM95 Musketeers, and was quite pleased to find that they are quite compatible in height. The Spencer Smith are slightly taller on close inspection, but near enough to be more than adequate when viewed together.
Posted by Snickering Corpses at 8:39 PM 5 comments:

Whereas the recent unrest in the Landgraviate of Ober-Schweinsberg has caused great distress to the security and trade of the honorable Principality of Hesse-Engelburg, and having been provoked repeatedly by the illegal and immoral attacks of the self-proclaimed Bad Nachtschwein League, and agency of merchants in rebellion against their sovereign and rightful Lord and Landgrave whichever he may be, and whereas said League were known to be embarked upon an endeavor to invade, attack, and subjugate the peaceful city of Vergoldeten,

Be it known to all hearers that Their Graces, the Fürst and Fürstin Guntram and Sieglinde Blauerwolf, rightful rulers and sovereigns of this Principality of Hesse-Engelburg, have, with the agreement of Prince Arnold of Ober-Schweinsberg, undertaken to extend their protection to the citizens and lands of the city of Vergoldeten. In accordance with the wishes of Their Graces to ensure the free flow of huminatarian supplies and in accordance with the terms of said agreement, Their Graces do order and command that all manner of supply except weaponry shall be freely permitted to pass through Vergoldeten once inspected for contraband, save such supply as be destined for the rebellious towns of the Bad Nachtschwein League, the which shall remain under embargo for the duration of the state of war that presently exists with that body of rebellion.

Having extended their protection to the city and its surrounding district, Their Graces do declare and form the Barony of Vergoldeten and confer said title upon Brigadier Werner Heintzen, hereafter to be known as Baron Heintzen of Vergoldeten, in recognition of the key service provided by his brigade in the repulsing of the forces of the League from their attack on the city.

Be it also known that battle honors are accorded to the regiments of said brigade, namely the Sumpflöwen Musketeers and the Lintzer Musketeers, for their sterling performance in duty and honor to their sovereigns.
Posted by Snickering Corpses at 9:47 PM 2 comments:

Here's a belated set of photos of a couple of the Lintzer musketeers in progress, switched to purple facings from yellow. 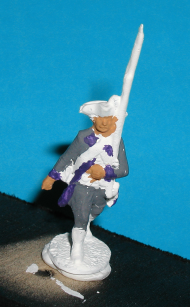 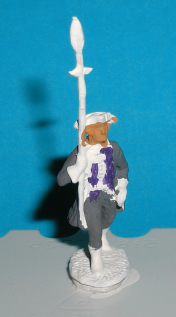 Yeah, I know, I keep reorganizing my unit structure in spite of not getting much of anything painted. But I've done it yet again, after looking for too long at Der Alte Fritz' battalions on his blog.

The short way of explaining the new organization would be to say that it's the same as the large generic battalion in BAR, but with one file cut off of every company. This means a total of 9 men per company, plus a six-man headquarters (officer, drummer, 2 standard bearers, 2 regulars). All in three ranks of course. This gives me a strength of 42 without the grenadier company, 51 with.

Which means, instead of being able to field 1.5 battalions of RSM figures, I can field 1 full battalion IF I acquire two more RSM Prussian Grenadiers. And have all of 8 extra figures left, most of them officers.

To go with this, I've decided to also use a 12 figure squadron formation, matching the one illustrated in BAR. This means a 3 squadron regiment would be only slightly less strong than a 4 company battalion.

To go with these new organizations, I finally got around to sorting through the Revell figures I received from a good wargaming friend. I may have to obtain some spares to fill out a handful of figures I'm short on, but I've now set aside 4 Prussian Musketeer Battalions (2 with grenadier companies, 2 without), 1 Prussian standing grenadier battalion, 1 Austrian composite grenadier battalion, and 1 Austrian Musketeer Battalion (with grenadier company). Also, 1 slightly over-strength Austrian pioneer company.

98 posts, 236 comments. Surprising to me really, how much activity there's been on here. I'm no longer sure how man total visitors there's been, due to having let the Neoworks account lapse by a day or two in the middle there.
Posted by Snickering Corpses at 10:44 AM 1 comment: