The second guards regiment added to the establishment, most recruits hail from Conradstadt and surrounding towns, and the regiment's depot is located there. The unit is a prestigious one, gaining recruits from among the best educated in Hesse-Engelburg due to the location of the depot in a university town.
Posted by Snickering Corpses at 9:00 PM 9 comments:

Headquartered at Waldschloß, the hereditary home of the Markgraf von Behler, the Jager Regiment von Behler is formed of hunstmen from the forest region roughly bounded by the Waldschloß and the towns of Hirschtal and Fünfleben. Its Inhaber is the Markgraf von Behler himself, and its commander is his eldest son and heir, Gebhard. Companies of the regiment are on active service patrolling the border areas around the castle, and are responsible for keeping the road between the Waldschloß and the trading center of Südmarkt clear of bandits for the trade caravans that pass through.
Posted by Snickering Corpses at 5:00 AM 4 comments:

Already obtaining a reputation for their eye-catching black uniforms with red facings, the Von Platzen Grenadiers recruit mostly in the hereditary lands of the Landgraf von Platzen around the town of Platzenheim. The regimental Inhaber is the third son of the current Landgraf. While his older brothers were born to the Landgraf's first wife who died giving birth to the second, Rupert is the eldest son of the Landgraf's second wife, and much of the regiment is reportedly financed from elements of his mother's own family fortune.

In their first major action at Hirschtal, the Schwarze Grenadiere performed adequately in extended volley fire but failed to distinguish themselves by any major achievement, earning no battle honors.
Posted by Snickering Corpses at 5:04 AM 2 comments:

A note on unit profiles

If you like the format I've set up for these, and want the HTML to achieve it, drop me a line and I'll send it to you.

The templates are free uniform templates made by David Morfitt and can be found on his Not By Appointment blog - http://nba-sywtemplates.blogspot.com/ David has a growing list of Seven Years War templates available, including Prussian, Austrian, and French infantry and a couple of types of Hussars. He's got more infantry and some cavalry templates underway.

The flags are from a template done by Jeff Hudelson of the Saxe-Bearstein blog. http://saxe-bearstein.blogspot.com

Many thanks to both of them for the use of the product of their labors.
Posted by Snickering Corpses at 5:21 AM 5 comments:

The second unit to enter the regular establishment, depot in Grauerhimmel. Recruits primarily from Grauerhimmel and surrounding towns. Its grenadier company is rumored to be formed entirely of second sons of goatherding families.
Posted by Snickering Corpses at 5:06 AM 1 comment:

The first unit entered upon the regular establishment, the Lintzer Musketeers are owned by Colonel Lintzer, and have their depot in Lintzhausen, the town founded by one of Colonel Lintzer's ancestors several centuries ago. The Lintzer family has made its fortune off of timber sales, and many of the recruits come from the town of Lintzhausen and the logging villages scattered through the surrounding forests.
Posted by Snickering Corpses at 8:45 PM 4 comments:

It is with some concern I have heard from friends of the tensions between the Duchy and your Slobbovian neighbors. Things are nearly as on edge as they were when we served together in the freikorps in the last war, are they not? I thought it suitable to write you informally about a little tender inquiry I have been making of late. I think it would be possible, were you to wish it, for me to arrange an audience for yourself or some other representative of the Duchy to speak with the Trade Minister and/or the Foreign Minister regarding beneficial trade agreements. Enclosed, I believe you will find an excellent sample of the product of our recently discovered rich gold vein, the which I encourage you to examine and keep for your mineral collection. I thought that perhaps the division of such a fine mineral sample to some in your acquaintance might help to demonstrate the benefits of trade.

RF
Posted by Snickering Corpses at 2:48 PM No comments:

To Duke Karl Frederick of Tradgarland

Their Graces have authorized me to conclude a non-agression pact between our two countries, as well as to propose the establishment of a joint river patrol to ensure that no soldiers or aid to our mutual enemies pass down the river we share in common.

Our forces are not yet in position to allow a formal pledge of complete certainty of armed assistance at this time. Let us say that we would each endeavor to aid the other to the fullest extent possible, considering our mutual security of grave importance. If this language is acceptable to Your Grace, I stand ready to conclude a formal accord to that effect at your convenience.

Our Minister of Trade also wishes me to inform you that we have ready a convoy of iron ore to assist you in development and arming of your own forces should you desire it, and we would be most interested in delivering samples of your fishing production to our markets to test the interest of our populations.

We've now crossed the 2500 visitor mark since this blog got its NeoCounter, and I'm amazed, but thrilled. Thank you everyone who's visited and commented.
Posted by Snickering Corpses at 4:49 PM 3 comments:

With thanks to David for the template, here is my rendition of my current planned uniform for the Fuchshöhle Hussars. 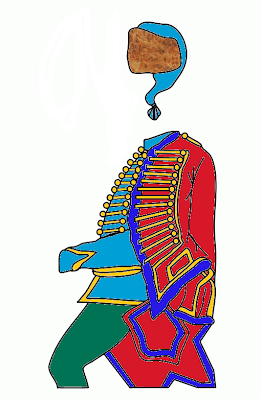 To His Grace, the Duke of Tradgarland, greetings,

It is my honor to express the pleasure of Their Graces at the receipt of your message, and their wish that we might settle into a comfortable accord of peace and trade. To that end, it is my intent to call upon Your Grace or Your Grace's ministers during the coming week, after I have resolved certain matters regarding the contentious situation in our southern neighbor.

I believe if we work together, we can ensure the free flow of trade upon the river known to us as the Hasenwasser, which I believe bears another name as it flows south through your own country?

It is my hope that we can encourage close relations between our two peoples, and perhaps discourse regarding the recent troubles to the south and the whisperings of fresh war in other regions.

You know, one of the things that is slightly odd to me, though I suppose with the mold process it makes some sense....in a number of cases, the best of the plastic figures seem to be more finely detailed and carefully molded than the metal ones. In many cases, this is actually a blessing with the metal figures, as you don't have to paint every last little raised button on a tunic. But sometimes, it becomes a little odd in places where different items meet, and aren't clearly defined. Like figuring out where to separate the musket, shoulder, and neck of some marching figures, for instance, so you can paint each part properly.
Posted by Snickering Corpses at 6:09 AM 3 comments:

In regards to your recent extension of offers to view your musterings, the Principality of Hesse-Engelburg offers to send Colonel Stieffer of our own Fuchshöhle Hussars, a fine officer whom we believe may be of use in the advising of your light cavalry in the proper manner of rapid negotiation of woodlands while mounted. We would also extend to your ruler the offer of the hospitality of our fine hunting lodge in the Fuchswald upon some fine eve, where he may enjoy the local sport of fox hunting and a respite from the weight of rule.

Being much disturbed by the recent focus of war upon your region, we thought it fit to write to you in our own hand and offer the return of your kindly loaned officer should you have need of him. We also regret to enclose evidence that the Stagonians may be providing financial support to the Bad Nachtschwein rebellion in our neighboring state of Ober-Schweinsberg. Your Highness will no doubt recognize the seal of a certain nobleman of the Stagonians upon the enclosed dispatch, which was capture amongst a recent Bad Nachtschwein convoy that attempted to sneak past our alert Hussars. If we may be of service with our small supply of iron to assist Your Highness in preparing his troops for the upcoming campaigns, we do hope it is known you need only ask.

Fürst Guntram Blauerwolf of Hesse-Engleburg
Penned by our own hand.
Posted by Snickering Corpses at 8:49 PM No comments:

The Principality of Hesse-Engelburg is, like our Saxe-Bearstein allies, considering our options at the present time. However, given our more northernly position than Hesse-Seewald and Frankfurt, we feel confident there is no necessity for Gallian troops to traverse our soil, though Their Graces have consented that diplomatic discussion may be initiated to prove otherwise if the Prince should feel it necessary.

In the meantime, Graf Sepp von Sickel, Minister of Trade, has suggested a meeting with his opposite number to discuss the security of trade routes through Gallia and her allies as well as to request that measures be taken to deal with one Madame La Grange, a merchant of Gallian cheeses who has been known to disparage the fine goat cheese products of Hesse-Engelburg with most reprehensible charges of having been cured by demon's breath or, even worse, of being in fact imported English cheese sold under false pretenses. We are certain the Gallian Minister of Trade will be eager to encourage the Madame to confine her advertising to positive qualities of her own product, which is a quite respectable cheddar enjoyed on occasion even at my own table.

Burgraf Heinrich von Waffenschmidt
Minister of State for Hesse-Engelburg
Posted by Snickering Corpses at 6:11 AM No comments: