A thought on origins

I've been pondering on an origination for Hesse-Engelburg, and have some ideas to run past people for suggestion.

I'm thinking perhaps it was once owned by one of the minor Hessian lines, but at some prior point that line rebelled against the Holy Roman Emperor, and the Blauerwolf family, then perhaps a Knight or at most a Baron, were granted recognition as Furst of the territory for their support in the fight to overcome the Hessian rebel.

It's a loose framework, and I may change it significantly, but some folks with a more detailed knowledge of earlier European history could perhaps suggest whether this is reasonable, and what time period might work for there to be such a conflict?
Posted by Snickering Corpses at 7:47 PM 3 comments:

Amazingly enough, I actually did a minor bit of painting this weekend, and the universe failed to explode.

Saturday, I spent a few minutes priming one of the two buildings of the JR Miniatures 15mm #1663 Worker's Quarters set, one of Frank's Minden Miniatures Prussians (directly behind the painted building), and one Revell WW2 British Infantry all with white artist's gesso (front right).

The first RSM95s I primed, which you can see in the background, I slapped this on a bit too thick on some, making them more blobbish. So I went a little thinner on it this time, and used the brush to keep excess from pooling.

Sunday, I put a first coat of paint on the Revell figure and did a trial of a pink coat on one of the old RSMs (slightly left of center). But the main focus was painting the building, which you can see in the middle of the photo, next to the unprimed second building from the same set. I still need to do a little more on it, but I was surprised at how well it came out with simply an undercoat and three colors of paint. I need to touch up a few spots of missing paint and add a few more details, but it's quite usable even in this state, which amazed me. 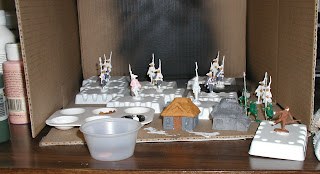 The box in which they rest was originally put together for my trials of the Plasti-Dip spray rubber as a primer. I've abandoned the Plasti-Dip for the gesso, but the box serves as a very nice portable paint booth, as it were, since I have no permanent space for them right now. It's hoped that as we finish re-arranging the basement, there will be an available work surface as well as an available gaming surface.
Posted by Snickering Corpses at 9:32 AM 4 comments: