A couple of you had requested pictures of my latest project. If you'll click on over to the Landgraviate of Ober-Schweinsberg blog, I've posted 3 views of my first test figure with the SSM plastic grenadier.

http://ober-schweinsberg.blogspot.com/
Posted by Snickering Corpses at 9:29 AM No comments:

There is now a single Spencer Smith plastic grenadier with a coat of white gesso base, and a yellow coat and vague resemblance of the bag of his cap in the same color. Also, a brown musket.

Now, I realize this is painting him totally out of keeping with general consensus of working from the skin out, but I wanted to see how the yellow would cover, as it's a different yellow than the one that failed so badly on the Lintzer cuffs and lapels. This one's Delta Ceramcoat, and it did very well on this initial test.

Given the rough nature of the Spencer Smith casts, one has to kind of guess at where some things should go, so I suspect I may continue painting out of order, touching things up until it looks right to me. Next up is probably the black facings and black of the bearskin and boots. I'm still debating trouser color.

Oh yes, it occurs to me I've not identified which unit, for which Jean-Louis will surely be agitated. Much as I hate to give such venerable figures to the enemy, I have decided to use the Spencer Smith grenadiers for the Gebuhren Eber Grenadiers of the Bad Nachtschwein League. Since my Hesse-Engelburg grenadiers are not in bearskins, they wouldn't really be useful there, so I gave them to the BNL so they can get onto the table against my H-E troops in time. Rest assured, dear reader, that the venerable Spencer Smiths are not unrepresented on the Hesse-Engelburg side, since the painted regiment of marching musketeers photographed a few months ago are going to be the Hesse-Engelburg marines. Which means, yes, that the current rumors of war may result in Spencer Smith vs Spencer Smith upon my table at some point.
Posted by Snickering Corpses at 8:44 AM 3 comments:

Rumor out of the Landgraviate of Ober-Schweinsberg suggests that the squadron of Hesse-Engelburg ships last seen off the Shetlands has appeared suddenly on the river approaches near Bad Nachtschwein, and begun landing troops to threaten the capital of the Bad Nachtschwein League and its surrounding towns. It would appear the spring campaign season is opening....
Posted by Snickering Corpses at 5:52 PM No comments:

A long delayed package has arrived at my home, thanks to the generosity of a fellow wargamer who was thinning his collection. The same gentleman from whom I bought the earlier Spencer Smiths has turned up a large batch of unpainted ones. Photos to follow, of the SSMs as well as the Minot and RSM figures also included in the lot. As usual, click on a photo for a larger view.

First up, we have a batch of Spencer Smith grenadiers, complete with a pair of drummers and a mounted officer. I actually need 1-3 more of these to finish off this battalion properly.

Next, we have a "cavalry squadron" formed of a mixture of 1 Mounted Officer, 5 Dragoons, and 8 Charging Aide-de-Camp figures. There are a half dozen total mounted officers, one of whom will be joining my existing Musketeers probably, and the last few are undetermined. 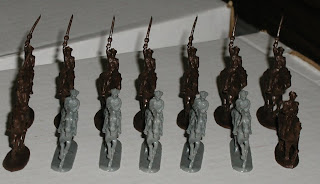 Next up, we have a batch from Barry Minot's AWI range in plastic, a mixed handful of figures comprising 3 light infantry, 2 Highlanders, and 2 regulars.

Also from Barry Minot's AWI range is a group of 16 British Grenadiers, who will hopefully find some useful service to perform. 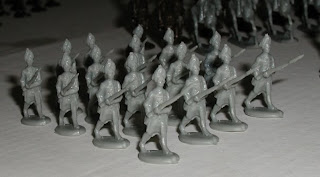 And lastly, we have yet another group of RSM95 figures. I'm guessing these are the firing versions of the Austrian Grenadier, but can anyone confirm?