I managed to get in about 10 minutes with paints again, and you'll find on all three of my blogs (here, Snickering Corpses, and Ober-Schweinsberg) the fruits of my labors. Below is the first skin-colored paint on a Minden Miniatures Prussian musketeer. As usual, clicking on the photo will zoom in. While I won't claim any of my painting attempts to be easy, I do have to say that this first bit of paint was easier than I expected on this figure. It's far from perfect, but I'm reasonably pleased with it so far. 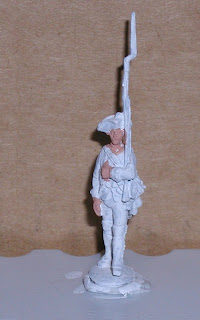 A letter delivered by a fast-riding courier to Hesse-Engelburg army headquarters.

Report of Major Rudel regarding the recent Stollenian venture. Having arrived in the Stollenian capital, we found ourselves unable to obtain an audience with the Grand Duke in the busy state of the palace, and so wintered upon the grounds of the palace until we were able to obtain audience with a minor minister of the Grand Duke. Doubtless news has reached you already of the invasion by the Electorate of Zichenau. We have observed the battles from afar, and I regret to report that the forces of Stollen have suffered two consecutive defeats on the battlefield, and the capital is currently being evacuated.

I confess to some puzzlement regarding the conduct of the most recent battle. Reliable accounts are of course limited in nature with the chaos currently underway, but a discussion by one of my command with a survivor of the von Laurenz regiment indicated a distinct lack of effective musketry on the part of this battalion, and made it to appear that this sole battalion was charged with holding off almost the entire Zichenauer force without adequate support. The soldier further claimed that his company and their supporting company were drawn up in the open in canister range of a Zichenauer battery and subjected to terrible casualties, while their remaining company was subjected to a brutal fusilade from a Zichenauer grenadier regiment known as the Newts.

While it is the nature of most soldiers to credit their regiment with the worst of the fighting, the apparent corroboration offered by a lack of significant casualty reports from any other battalion engaged leaves me to wonder at the training and cooperation standards of the Stollenian army. It is possible that the offer of Hauptmann Sontag to the Grand Duchy to assist in training their forces might be of some efficacy after his great success in the training of the militia of Tipplebruder.

In the meantime, having judged my mission here to be largely complete if not entirely satisfactory, I have sent off this missive and ordered my command to break camp and we are returning home by a circuitous route to avoid any collision with the advancing forces of Zichenau. I have taken the liberty of leaving one Hussar behind to monitor future events in case of matters of urgency, and secured to him the future service of the same courier to whom I am committing this message.

A book being read...

I've only read pieces of this one, but it seems an interesting backgrounder:
Europe in the Eighteenth Century 1713-1783 by M. S. Anderson. It's part of the "A General History of Europe Series" and publishedby Holt, Rinehard, and Winston in 1961. The bit that I've read so far is well written, and a nice overview of the period.
Posted by Snickering Corpses at 10:58 AM No comments: