Photo to follow once I dig up the camera again, but my order from Minden Miniatures has arrived. Lovely figures as expected!

Edit 03-24-2008: Photos as promised. The front left figure is the existing sample I already had. Front right is the Prussian Officer with Spontoon, and back left is the Prussian NCO. The rest are Prussian Musketeers. 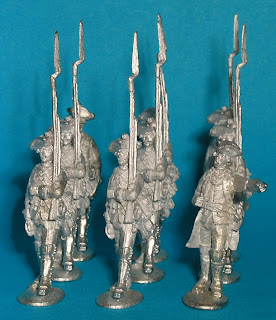 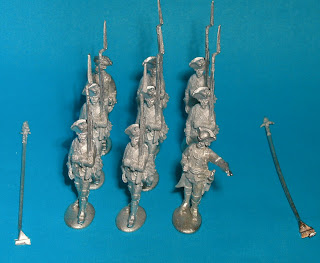 Posted by Snickering Corpses at 6:19 AM 3 comments:

I'm currently involved in that grand thing known as the waiting game, for new wargaming items to arrive. It'll probably be a couple of weeks for most of them.

I did recently receive a copy of Donald Featherstone's "War Games", which I haven't gotten around to reading more than a little of. This is partly due to time constraints and partly due to waiting for it to air out, as it smells heavily of perfume.

There's also a half-dozen or so other books all picked up for decent prices. Among them is the second edition of Duffy's "Army of Frederick the Great". There's some disagreement as to whether the first or second edition is better, so now I have both. ;) Also picked up an Osprey on the Austrian army of the SYW period, and one on the Confederate Army of the American Civil War. A couple of others I don't have handy in memory. ;)

Additionally, I picked up from Stokes "They Died for Glory" Franco-Prussian War rules. I don't have any Franco-Prussian war figures at present, but the idea is tempting, and i also might see what needs to be modified to use them for my ACW figures.

But on to the expectations. I managed to sell a few wargaming items recently, and put the money made into financing a few new purchases. I'm waiting on several items to appear:

1) A company worth of Prussian figures from Minden Miniatures. The current exchange rate is painful, but Frank didn't mind a small order, so I've bought a company now and will gradually attempt to increase to a whole battalion when I can afford it. If the exchange rate doesn't shift dramatically, this should cost me between $130-150 all total over time. In comparison, I can form an RSM battalion to my organization for about $50, though if metal prices keep rising RSM is eventually going to have to raise their prices. Frank's figures are too lovely not to try to get some though.

2) A bag of RSM95 Prussian Cuirassiers. I'm looking forward to their arrival. Need some ideas, though, on the best way of attaching the swords/standards to hands. Solder them, glue them, what? I've never had to attach metal to metal before in anything too small for a bolt. ;) if I have the counts right, 3 bags of the Cuirassiers plus one extra each of an officer, standard bearer, and trumpeter will give me a full four squadrons. Of course, that's about $70 or so.

3) Somewhere in the neighborhood of 50 plastic Spencer Smiths, unpainted. Still waiting on these to ship.

4) Found some decently priced 15mm buildings. There's a ton I'd like but don't have the funds for. But I did pick up a church and a couple of "servants' quarters" buildings. Having buildings that are smaller than the troop scale doesn't bother me, as I operate with limited space anyway. I can appreciate the beauty of a properly scaled building, but it's not necessary to my enjoyment.

5) A friend found some spare parts to fix up the half a howitzer I have for my WW2 armies, and is sending that along with a couple of additional vehicles. An Opel command truck for my Germans, and parts to end up with either a tank or tank destroyer for my Americans.

And....I think that's everything. Not a bad lot of items. I need to sell some more stuff to keep financing. I'd like to get some Sash&Saber cavalry before the end of the month, as I really like the one sample hussar I have. But I need more funds first. I'd also like a few more buildings if those first two buys prove satisfactory.
Posted by Snickering Corpses at 8:15 AM 4 comments: