Several people have offered comment on the mystery figures in the last post, and I've had a couple of requests for further photos. Initial thoughts seem to be that Scruby is a good bet for the Austrian infantry on the left, while the grenadier has been described as Scruby-style but not a Scruby pose.

I took some time this morning to pull multiples of the two figures out of the bag so that I could take photos from multiple angles at once, and also dug out the standard bearer and drummer from the grenadiers, as I know standards are often a distinctive pose, particularly with this one having a molded on flag. As always, click on the picture for a larger view.

To answer a couple of questions, all figures are about 36-37mm tall from bottom of base to top of comb/bearskin, and about 30-31mm from sole of boot to roughly where the top of the head should be under the hat. They're very noticeably taller than Hinchcliffe 25mm Austrians, but only slightly taller than Spencer Smith SYW figures. None of them seem to have any markings on the bottom of the base. 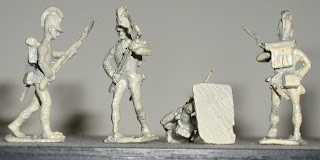 Posted by Snickering Corpses at 10:37 AM 2 comments:

I finally got around to pulling out the camera and taking a picture of the RSM95 figures mounted on Hinchcliffe horses. While I was at it, I also took a picture of a couple of Napoleonic figures that I need help identifying. If anyone recognizes the figures in the second photo, let me know. As always, click on the photos for an enlarged view. 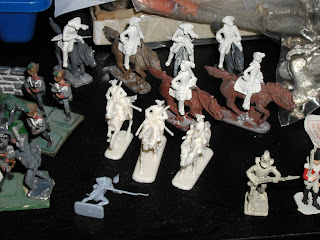 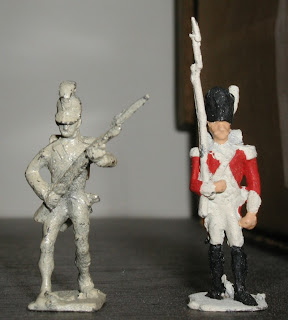