Basing and a Church

A big thank you to the gentlemen of the Old School Wargaming and Society of the Daisy lists for their contributions on basing. The vast majority recommended ordinary white glue for attaching all sorts of figures to bases, so yesterday and today I spent some time with my Litko bases attaching the figures for the Lintzer Musketeers to the 1"x1" bases with Elmer's "Glue All" white glue. I was also able to get the roof paint on the JR Miniatures church. All it will need now is windows and some touch-up work where paint has overlapped its areas. Photos below, as always click for a larger view.

First, a photo of the battalion fully based. You can see the partly painted first company on the right of the photo, and the grenadier company on the left of it. All figures by RSM95. The final frontage of the battalion is a whopping 17 inches with a total of 51 figures in 3 ranks. The battalion has 4 companies of 8 musketeers and one officer, a grenadier company of 8 grenadiers and one officer, and a central flag group of 2 standard bearers, 2 musketeers, 1 drummer, and 1 officer.

Next, a photo of the church with its red roof. However, I would note that the actual roof color is darker than this photo, as the flash seems to have brightened it considerably. 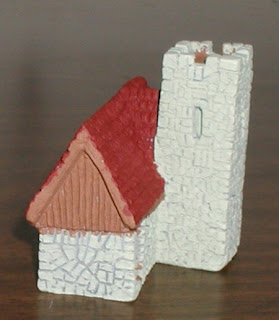 And lastly, the two together, giving a sense of the scale of the 15mm JR Miniatures buildings next to a big battalion of the RSM95s.

Figure Ponderings and other things

Firstly, the 100 1"x1" Litko bases have arrived. I hope to get some time to tinker with them by this weekend. We shall see!

Meanwhile, I'm expecting another small cash infusion, so I'm pondering some figure purchase options and am up for some advice. Stokes from the Grand Duchy of Stollen is currently pondering heavy cavalry options. I, in my turn, am currently pondering cavalry also, but not exclusively so. Nevertheless, let us discuss cavalry first.

My intended organization for cavalry squadrons is 1 officer, 1 standard, 1 musician, and 9 other ranks. I currently have the following:

Hussars - RSM95: 12 "other ranks", Old Glory 3 command sets: 1 officer, 1 standard, 1 musician, 1 man with pistol (NCO?).
Cuirassiers - RSM: 1 officer, 1 standard, 1 trumpeter, 9 other ranks.
Dragoons - a mixed bag of Spencer Smith plastics, including one officer and I think 11 others mingling dragoons and the "aide" with his sword pointed straight up. I have no difficulties painting all these as a dragoon regiment.

Other foot options:
RSM95 Hanoverians - I need about 30 figures to complete a battalion of these from the stray figures I received from Ebay. A 36-figure bag is $27.00. RSM is usually very nice about letting me customize a bag, so I could probably modify a Hanoverian bag with the right figure mix and an extra 6 foot figures.

RSM95 Highlanders - I currently have 6 standing firing poses, and 12 kneeling firing poses. I've debated how to handle these figures for a firing line. The only other pose of "other ranks" RSM makes is a marching pose. Would the marching pose work as a third rank for a normal 3-rank deployment? Or is that going to look silly and I should settle for a long two-rank firing line instead? Thoughts? If I did a 2-rank firing line, I'd probably go with 4 12-man companies, plus a 6-man command group. So I'd need another 36 figures precisely, for $27.00.

Scruby Jagers - Another option I considered was to build a battalion of jagers with Scruby figures. This would take 3 bags of 12 foot and 1 bag of 6 foot, giving me a total of 42 figures for $33.25 counting $7 postage.

Opinions from the gentlemen of the mess? Whatever I do, I can only afford to do one of the above options at present.
Posted by Snickering Corpses at 4:01 PM 7 comments:

A grandiose title for this one, but I must admit to there being quite the feeling of reverence mixed with euphoria yesterday as I opened for the first time my own copy of "The War Game" by Charles Grant. This is the original first edition printing, not the recent reprint with reorganizations and additions by his son Charles Stuart.

I spent what time I could yesterday going through the book, skimming some sections and reading others, and especially perusing the pictures. Even in black and white there's lots to love. I find myself wanting to get out the Battlegames issue with the Mollwitz refight and see how many units I can identify from the black and white to their color version in Battlegames.

This shall surely have a pride of place upon my shelf alongside Charge!. Next on the agenda (Christmas list perhaps) is "Programmed Wargames Scenarios". Perhaps followed by Charles Stuart Grant's "The War Game Companion".
Posted by Snickering Corpses at 7:38 AM 2 comments:

If you check my main wargaming blog, http://snickeringcorpses.blogspot.com, you can see what I've currently got on the painting and assembly workbench.
Posted by Snickering Corpses at 11:09 AM No comments:

Waiting for More Stuff Too

I decided to jump while the cash was in hand, and order some basing supplies from Litko. Got an excellent responsiveness from them on an inquiry about custom movement tray sizes, so I am now awaiting the arrival of two separate orders.

1) 100 1"x1" bases. These are what the Spencer Smith figures came on (though in metal) and they seem suitable for most of the variety of figure shapes that I have in 25-30mm metal, so I decided to buy a set of them. This should be enough to base my RSM95 battalion, plus 40-odd leftovers which I shall later decide what to do with.

2) A set of custom movement trays to enable me to put my first RSM95 battalion in movement trays, as well as 4 companies of the Spencer Smith figures. Also in this order is a set of purple heart markers from Jim's Lab. He had the red life markers, and I put in a comment suggesting purple ones as another useful color, and they're already up there.

Shouldn't be a lot more buying after this, as I'm about tapped out. :>

My hope, though, is that being able to base the figures will do a couple of things for me. Firstly, I'm hoping that sticking the RSMs on their bases, even bare metal on bare wood, will inspire more painting work. The other is that I'm also hoping that having them based and on movement trays will make it easier to put together a small battle, since I can push the movement trays around rather than heaps of individual figures. Makes the movement faster while not sacrificing the individual basing.
Posted by Snickering Corpses at 11:18 AM 2 comments: